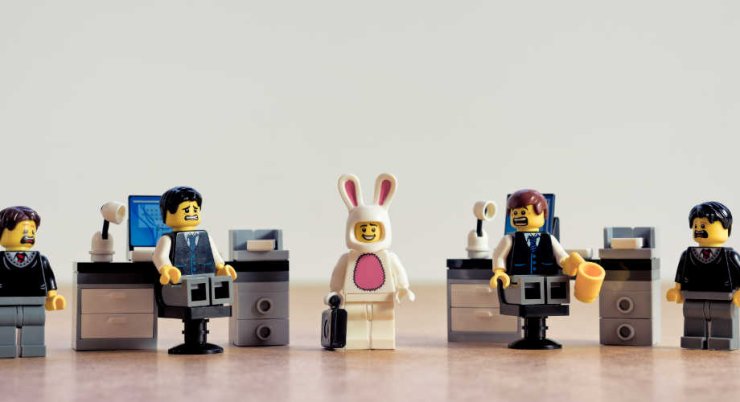 Recently I've been thinking about originality and authenticity -- and also weirdness. As a young person I've been struggling a lot to find my place in the world. It was hard to belong somewhere, because I felt like I didn't belong anywhere. As a teenager it felt frustrating, because no community was right for me. I stayed for a year – at most–before I realized I don't belong there either. It felt weird. I was weird.

Weird things are great though. Strange things are awesome. In the arts beauty is in the eye of the beholder. What people mean by that is that only the eye who judges a piece, sees its beauty, or the lack of it. The greatest beauty, however, comes from unbeauty. Weirdness, strangeness, and therefore also originality and uniqueness is the source of the beauty for the eye, which beholds it.

Which is a very long way of saying that not everyone finds the same things beautiful but that unique things are always beautiful to a certain degree to a certain group of people.

Is being weird ugly?

The question is relevant because, watching Andreas Antonopolous' Keeping Digital Communities Weird, I have to agree that the weirdness of a thing is the only thing that makes it attractive (to the people I like to hang out with).

I have to agree. It's the weirdness that attracts most people to almost anything. It's the weirdness that makes things inviting, even tempting. Weird things attract so many people, that at one point it becomes so over-used and over-hyped that the original founders of the weird thing, go away to something new and weird. Digital communities were weird, and they still are, but I hold all the weird conversations we had there dear to my heart.

So in the same as saying something is weird, I'd like to argue that weird is beauty, because it's always in the eye of the beholder to judge what's beauty and what is not. Things are beautiful because they are strange, because they are a little "off".

As creators, however, we always strive for perfection. The idea, that spark, which kicks one off into the entire creative process is also what keeps one going. We try to reach that perfect image, but as it is with perfection, it cannot be reached. Here's one of my absolute most favourite quotes on perfection here. It's from TRON Legacy:

"The thing about perfection is that it is unknowable, it's impossible, but it's also right in front of us, all the time" ~Kevin Flynn, TRON Legacy

Perfection is your best friend, and your worst enemy at the same time. The greatest artists learned to deal with their own perfection at some point:

"Have no fear of perfection. You'll never reach it." ~Salvador Dali

So, rather than aiming for perfection, it's the imperfection we should aim for. The point at which it is just good enough. Masters design imperfection. Which means that once someone reached the level of mastery,designing the result becomes a choice. Masters create the picture in their head, and make it a reality. Masters can say: "Of course I can make it clean, beautiful, and pristine, but today I don't want to."

It's my point of view that the imperfection is the thing that makes something beautiful. Crooked lines, off-center pictures, noisy rattles, kaput record players, broken samplers, a big nose, and oddly reflective eyes. Imperfect things are what among the most perfect pieces of art that we have. Weird is good. Weird is attractive. Weird is beauty.

And yet perfection is the goal. Isn't that weird?

In the social media world agencies search(ed) for authenticity for their campaigns. Linked here is a paper named "The Role of Authenticity in Electoral Social Media Campaigns" from 2012. In the early days authenticity, or trueness, was an integral part of marketing on the web. At one point it became so weird that companies asked themselves how they could stay "authentic" in the social world to stay relevant. What a fucking bullshit.

I can tell you what "being authentic" means, you fucking own whatever the fuck you are. That's it.

As an example, we can take a look at Bosch. The goods this company produces is not funny, not entertaining. Bosch is known as a company for products that just work. So instead of making an entertainment YouTube channel, they just own their seriousness. And that's what makes them cool. It's what makes them special. Weird, but cool.

Social media was once weird too. I remember the days when Twitter was so small, that the apps we used could still show the global "stream" of tweets. When the infamous @-mention was invented by us, the users. It was gloriful!

Now young entrepreneurs and companies get into the game, and they struggle with the same kind of problem:

How can I be me, and still be an attractor on social media?

By the way: I can see how this makes it sound like it's pretty easy to say for someone who has struggled so much, and still does, but at the same time I also can't make it any easier. So, haha.

I realize at this point that I digress. It was not my point to reminisce about the old days of the internet. The days when we had to actually type the @ symbol, and the username ourselves. The point I wrote this was that I'd love to say thanks to everyone who was weird enough to do exactly what I was doing, at the same time I was doing it. Thank you to all the weird people, the nerds, the freaks, the outsiders, and the misfits.